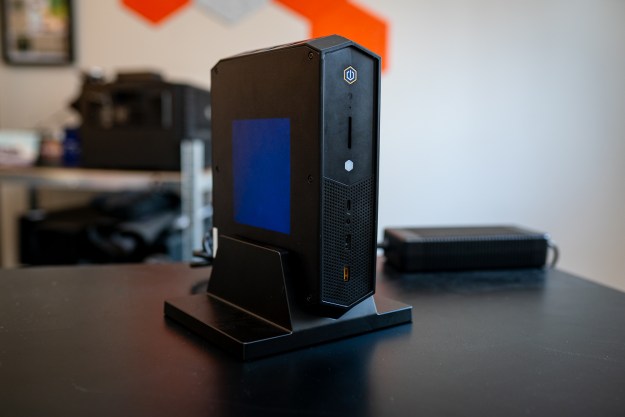 Intel’s NUC, or Next Unit of Computing, machines don’t usually make it into the pantheon of the best desktop computers, but the NUC 12 Enthusiast is causing me to take another look. It’s a DIY kit where you need to bring your own memory and storage, but the power Intel was able to pack into this machine considering its size is nothing short of remarkable. A big asterisk is unsurprisingly in order.

It’s a tiny and very powerful PC, but it’s joined by a power brick that’s nearly as large. In addition, the NUC 12 Enthusiast shows an impressive debut for Intel’s Arc Alchemist mobile graphics, which excel in recent titles but fall behind in older games. Even with some caveats, the NUC 12 Enthusiast puts up far more pros than cons.

On the gaming front, it can put the PlayStation 5 and Xbox Series X to shame at a fraction of the size. For creators, it rivals desktops that are more than 10 times as large, and with only laptop hardware in tow.

Intel sent the NUC 12 Enthusiast out pre-configured, but if you’re not used to the NUC line, let me catch you up. It’s a barebones PC, so a base kit comes with everything inside minus storage and RAM.

You’ll need to add those on your own. The NUC 12 Enthusiast comes with three M.2 NVMe SSD slots (two PCIe 4.0 and one PCIe 3.0), as well as two slots for up to 64GB of DDR4 laptop memory (SODIMM). Although the Core i7-12700H inside the machine supports faster DDR5 memory, you’re unfortunately locked to DDR4.

My configuration came with Windows 11 pre-installed, which is what I used for testing. The barebones kit doesn’t have an operating system, though, so you’re free to install Windows or one of the various Linux distros that the NUC 12 Enthusiast supports.

Smaller than a book

The amount of power Intel was able to cram into the NUC 12 Enthusiast is crazy considering its size. It’s a mere 2.5 liters by volume.

Worthless comparisons aside, it’s clear the NUC 12 Enthusiast is tiny.

Despite that, it’s packing the latest tech under the hood: Thunderbolt 4, Wi-Fi 6E, Bluetooth 5.2, and even DisplayPort 2.0; the gang’s all here. The only caveats are a large 330W external power brick for the machine and a rather large vertical stand. There are feet to set up the NUC 12 Enthusiast horizontally, though, which leads to a much tidier look.

You’ll need to open up the NUC 12 Enthusiast and install RAM and at least one SSD, and it’s easy enough. Intel has the RAM and SSD slots situated on the back of the board, so you don’t have to dig around more sensitive components to install what you need. My only quibble is that Intel uses an Allen key for the exterior screws and a Philips head for the internal screws, so you can’t just grab a screwdriver and get to work.

On the plus side, all of these screws are captive, so you don’t have to worry about losing them.

You’re free to dig deeper in the machine if you wish, though there isn’t much of a reason to. The graphics card and CPU are soldered to the board, but it’s still nice to have access below the main cavity for troubleshooting if something is acting up. Before you get to the SSD and RAM slots, Intel has an LED panel where you can slot in custom decals.

The panel is just a big RGB light that you can control with software, so you’re free to slot in anything that can block some light for a unique design. It’s a gimmick but still a cool piece of flare nonetheless.

The Core i7-12700H is a laptop processor, so it’s not as powerful as the Core i7-12700K or Core i9-12900K that you can find in a full desktop. Despite being a laptop CPU, it outperforms the same chip in most laptops with access to better cooling and higher boost potential.

You can see that when the chip is stacked up against the Lenovo ThinkBook Plus Gen 3, which also has a Core i7-12700H. In Cinebench R23, the NUC 12 Enthusiast is about 5% ahead in single-core performance and a massive 38% ahead in multi-core performance, and that’s with the ThinkBook Plus Gen 3 in its Performance mode. A tuned laptop can squeeze out a win over the NUC, though, as evidenced by the Core i7-12800H inside the Lenovo ThinkPad X1 Extreme Gen 5.

Although the processor is impressive for a mobile chip, it’s still behind a full, fat desktop CPU. Even with access to fewer cores, the desktop Core i5-12600K offers better single and multi-core performance. Still, the NUC 12 Enthusiast sits closer to desktop performance than laptop performance, despite what its specs would suggest. 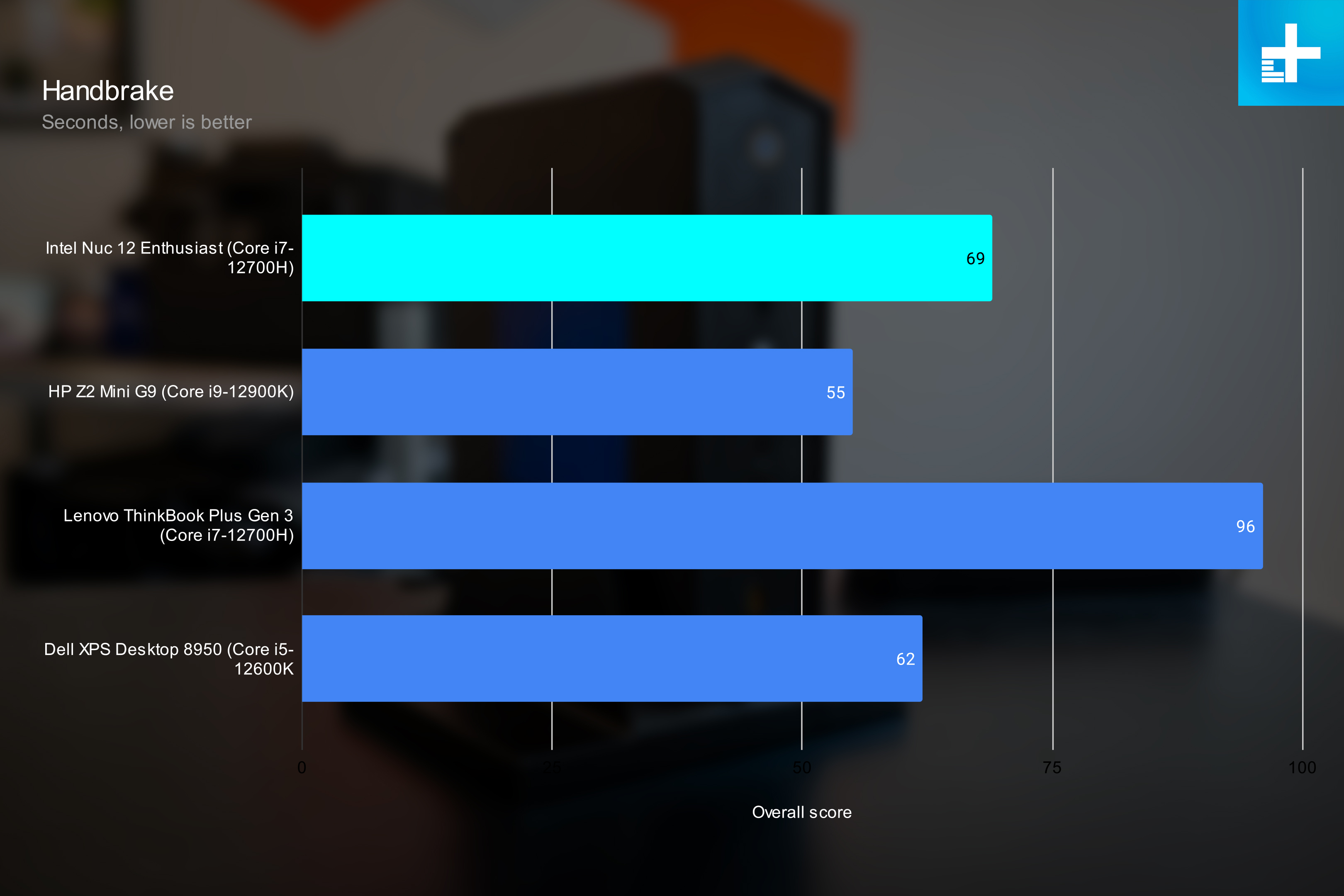 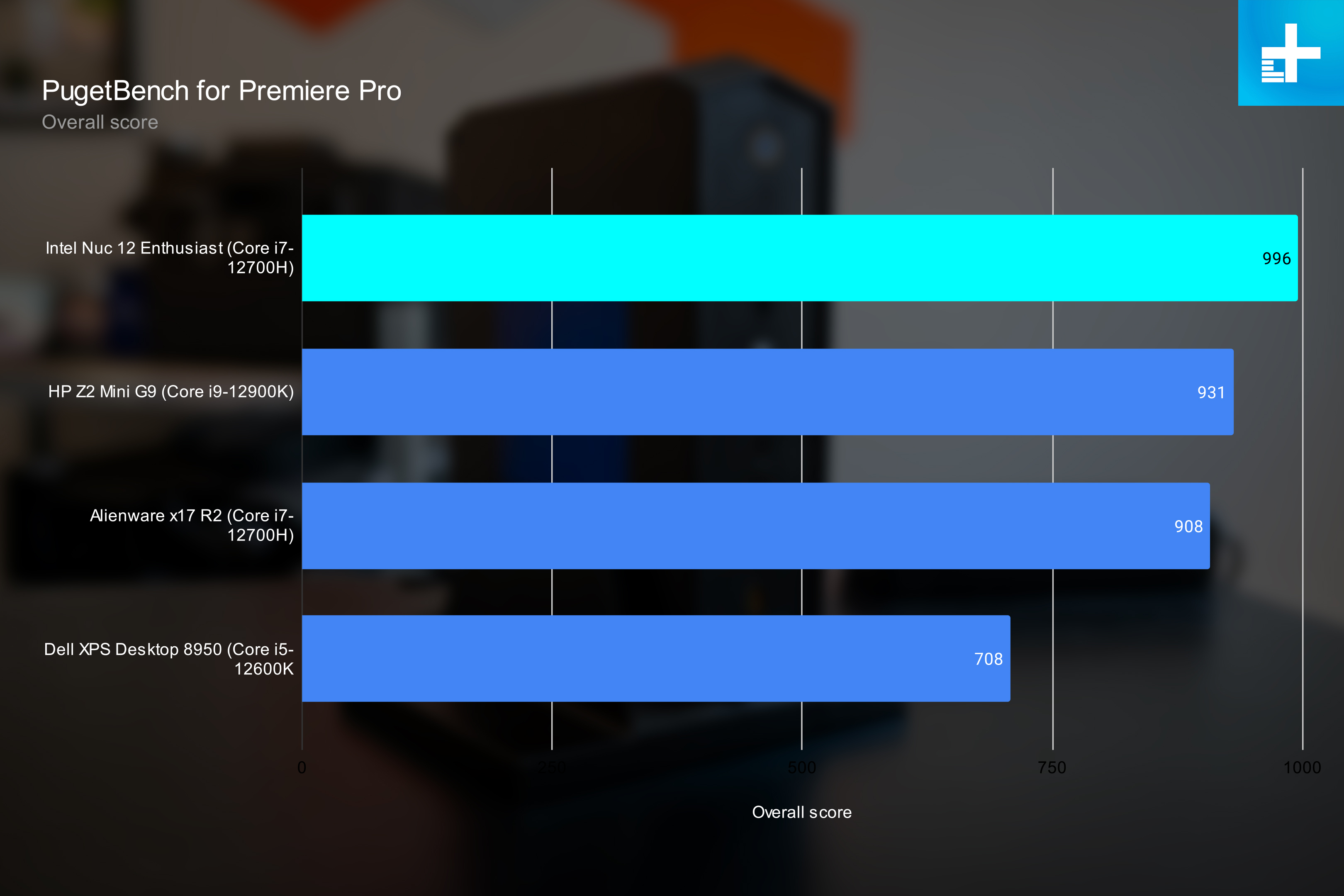 Handbrake, the free video encoding app, is a testament to that.

Encoding times were only a few seconds longer on the Core i7-12700H compared to the desktop Ryzen 5 7600X and Core i5-12600K. On top of that, more powerful laptop CPUs like the Core i9-12900H inside the HP Envy 16 are far behind, despite packing more cores and higher clock speeds. The NUC 12 Enthusiast carries some unique advantages for creative apps due to having an Intel processor and graphics card, too.

In Premiere Pro, the NUC 12 Enthusiast is even close to a desktop AMD Ryzen 9 7950X, which is a processor that draws 230 watts with 16 full cores. That’s insane, and a huge testament to the optimizations Intel has in creative apps like Premiere Pro.

No, the NUC 12 Enthusiast isn’t going to put a full gaming desktop with an RTX 4080 to shame, but it’s still a powerful mini gaming PC considering its size. This one stands out because it includes Intel’s Arc A770M mobile graphics cards, which are based on the Arc A770 and A750 desktop GPUs.

It drives above 60 frames per second (fps) in most games at 1080p, and with upscaling features like Intel’s Xe Super Sampling (XeSS), you can even push higher resolutions like 1440p and 4K. Intel’s Arc graphics cards actually perform better at higher resolutions, which is why you see relatively small gaps between 1080p, 1440p, and 4K in most games. Although you’re getting the Arc A770M, it’s the mobile version of Intel’s flagship desktop GPU.

It carries the same name, but you’ll get lower performance in games like Horizon Zero Dawn. It gets close in some titles, though, particularly Cyberpunk 2077.  Small form factor gaming PCs like the Falcon Northwest Tiki and even Intel’s NUC 11 Extreme will always put up better performance due to the larger graphics cards inside. The NUC 12 Enthusiast is still impressive considering how small it is, going toe-to-toe with machines like the HP Z2 Mini G9 in games despite costing much less.

Try to handle the heat

Heat and noise are the main enemy of small form factor builds, but Intel manages the heat well in the NUC 12 Enthusiast.

At idle, the processor sat around 45 degrees Celsius, which is great for this small of a PC. The temperatures quickly climbed to 95 degrees in Cinebench R23, resulting in the CPU throttling down to around 3.1GHz. CPU throttling is important in a machine like this, but it only matters if the processor is underperforming.

And as you can see in my testing above, that’s not the case. The two internal fans and ventilation around the machine are able to move heat out effectively, so although the processor reaches its thermal limit, it’s still able to operate at a higher level than what we see with the same CPU in laptops. The noise isn’t bad, either, never surpassing a faint hum even when the machine was pushed to the limit in Cinebench.

Gaming is a different story. With the CPU and GPU stressed, the NUC 12 Enthusiast can get loud, though still not as loud as monstrous gaming laptops like the MSI GT77 Titan.

Should you buy the Intel NUC 12 Enthusiast?

The NUC 12 Enthusiast punches above its weight in performance, features, and design. It’s a clear example of what’s possible in a small form factor with a dedicated design and hardware (not dissimilar from the M1 Mac Mini).

Creator performance is fantastic for the size, especially considering the amount of storage the NUC 12 Enthusiast support, and you’re getting a fantastic 1080p gaming experience. Price is the main limiting factor considering you’ll have to add your own RAM and storage to an already expensive barebones kit. Although the NUC 12 Enthusiast outclasses laptops that cost just as much or even more, it also takes a backseat to larger desktops like the Dell XPS Desktop 8950 that cost less money.

The NUC 12 Enthusiast handles heat well, and it performs much better than its size would suggest.