Which Pokemon Scarlet and Violet Starter Is Best? 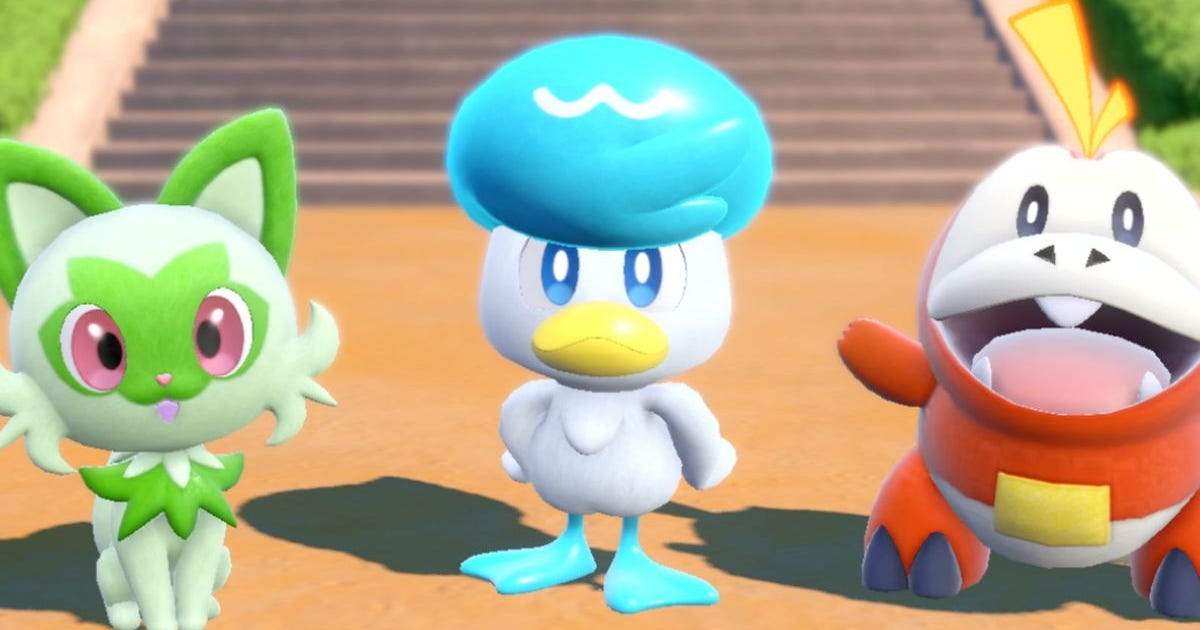 Pokemon Scarlet and Violet do a lot to freshen up the franchise. The games feature the Pokemon’s first true open world, mixing collect-and-combat gameplay with Breath of the Wild-esque exploration. But the more things change, the more they stay the same. like every other game in the storied series, Violet and Scarlet open by giving you a choice: grass, water or fire?

In Pokemon Scarlet and Violet, that choice is rendered as: Sprigatito, Quaxly or Fuecoco?

Sprigatito is an Eevee-like grass Pokemon, Quaxly a water-type duck with a sweet hairdo, and Fuecoco a chirpy fire-type crocodile. Your starter Pokemon acts as the bedrock of your team, so it’s a tough choice. I’ll let you know early that my pick is Quaxly, but here’s what to know before making your decision.

Which Pokemon has the coolest evolution?

Let’s be honest, this is largely what it comes down to.

Strategy is important, but a lot of which Pokemon is best comes down to which design to you vibe with the most. Sprigatito’s final evolution is Meowscarada, Quaxly turns into Quaguaval, and Fuecoco’s peak form is Skeledirge. I know what you’re thinking, and no, I can’t pronounce any of those names.

Meowscarada, the final form of Sprigatito.

Quaguaval, the final form of Quaxly.

Skeledirge, the final form of Fuecoco.

Obviously this comes down to taste, but I’d rank the designs in the order of Quaguaval first, Meowscarada second and Skeledirge last. You can’t see in that static image, but Quaguaval is a salsa dancer that boogies along like a Brazillian Carnival performer. It’s extremely fabulous.

Meowscarada is a close second, achieving a good middle ground between elegant and fierce.  Skeledirge is a brute. Look at it.

Quaguaval and Meowscarada look like characters, while Skeledirge looks like a monster to slay. But maybe that’s just me. Note, however, that each final evolution has not one but two types.

Meowscarada is both grass- and dark-type, Quaguaval is water- and fighting-type, and Skeledirge fire- and poison-type.  Read more: Pokemon Scarlet and Violet Review: Too Much for the Switch to Handle

Which Pokemon is best for the early game?

Pokemon Scarlet and Violet give you three main quests to complete concurrently. The first is to beat the Elite 4, the second is to find and defeat five Titan Pokemon, and the third is to locate five Team Star bases and best the base leaders in a Pokemon battle.

Pokemon Scarlet and Violet are open-world games, which means there’s no strict path to finishing these missions. But for most people, the first few bosses are going to be a combination of:

I know this might sound crazy, considering there are bug- and grass-type bosses in the mix, but Quaxly is a great bet. It may be a water-type Pokemon, and thus weak against grass-type enemies, but it learns Wing Attack at level 10.

That flying-type move is Super Effective to both bug- and grass-type Pokemon. Meanwhile, Quaxley’s regular water-type moves are Super Effective against both the ground-type Klawf Titan and Team Star base leader Mela’s team of fire-type Pokemon. If there’s a strong argument against Quaxly, it’s that you can catch a Magikarp fairly early in the game.

Train that Magikarp up to level 20, and you have yourself a Gyrados — one of the most powerful Pokemon in the game, and one that also can use water- and flying-type moves. Still, training Magikarp can be a pain, and by the time you evolve it you’d probably already beaten a few of the above-mentioned bosses.

Which stats do the starter Pokemon specialize in?

The harder question to answer might be which Pokemon is best for late-game play in Violet and Scarlet. It’s a hard question to answer, because it very much depends on what other Pokemon you stack your team with.

But if you’re thinking long term, you’ll want to know what areas the three starters specialize in. Meowscarada’s strongest attribute is its speed. It’s by far the fastest of the three starter evolutions, though the downside is less health.

Note that it has much greater attack than special attack, meaning you’ll want to teach it physical moves. Skeledirge is more of a tank. It’s the slowest of the three, but has the most health and defense.

Quaquaval, meanwhile, has the strongest attack stat of the three (but not special attack, that goes to Skeledirge), and is in the middle in terms of speed and health.