The most anticipated laptops of 2022: XPS, MacBook, and more The most exciting laptops of 2022 might not be the ones you'll actuallypurchase. In some cases, these are devices that push the boundaries of what's possible -- or even practical -- by experimenting with different form factors and next-gen technology. Then there's the special. forward-thinking design that actually anticipates your needs as a laptop user.

These often end up becoming the very best laptops you can buy. Will any of these new laptops in 2022 nail that balance? I can't wait to find out.

One of the most controversial new laptops at CES this year, the Dell XPS 13 Plus is the kind of device that's made to get people talking.

This is a laptop that trades the hallmark XPS look for something that's both more experimental and more familiar. Gone is the carbon-fiber "weave" material, made famous by the last five years of XPS laptops. In its place is a far more conventional fully aluminum chassis, with one darker and one lighter color option.

However, the controversy around the design mostly surrounds the ports and keyboard. You only get USB-C here -- not even a headphone jack has been included. That's enough to turn some people off.

But taking things further, the XPS 13 Plus also replaces the standard function keys with capacitive touch buttons. No, it's not a Touch Bar, but it does haptic feedback in the same way. The seamless glass on the palm rests, though, combined with a new haptic trackpad, looks visually stunning.

As does the overall design itself. Toss in one of the new 28-watt Intel P-series processors, and you've got a laptop I can't wait to test out and explore further. 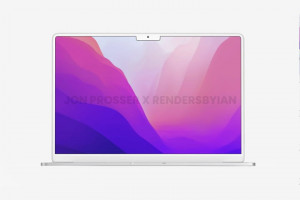 The MacBook Air M1 was an excellent laptop when it launched toward the end of 2020 -- and it still is. But it used the exact same chassis as the pre-M1 MacBook Air, and rumors about a redesign have been stacking up.

Most of the reports point to a new design that takes inspiration from the 24-inch iMac, which sport white bezels, a number of bright color options, and an extremely thin chassis. With the design elements taken from the late 2021 MacBook Pro, we may even see the ultrathin bezels and webcam notch roll out to this new MacBook Air as well. This is all just rumor and conjecture, but clearly Apple is working on a significant redesign of the MacBook Air (which may end up getting renamed the MacBook), and it's one of the most anticipated new laptops of 2022.

Foldable screens have a tendency to draw a crowd, and the Zenbook 17 Fold is the latest and most exciting of the bunch.

That's because it uses a larger 17-inch display, which makes for an enormous tablet. However, when folded down into laptop mode, you have a full 12.5-inch 3:2 screen to work with. That's large enough to feel like a legitimate laptop replacement, unlike the ThinkPad X1 Fold, which more closely resembled a netbook from 15 years ago.

The quality of the screen and hinge, of course, are also important factors in a device like this. Have foldable laptops caught up to the latest foldable phones in terms of durability? We'll have to wait and see. 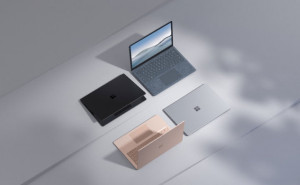 The Surface Laptop is one of the lines that Microsoft has consistently updated every year since its launch in 2017.

That inevitably means we can expect the Surface Laptop 5 to launch sometime in 2022, but what makes it such an anticipated release? Well, the design of the Surface Laptop has remained unchanged over the past five years, and while it remains a sleek look, it's due for an overhaul. After seeing what Microsoft pulled off with the Surface Pro 8, I'm excited for those same features to roll out to the company's flagship laptop as well.

I'm hoping for thinner bezels, better performance, an improved webcam, and possibly even Thunderbolt support. Microsoft has also been experimenting with different processors across its Surface devices, whether that's using AMD on some models or even its own ARM-based chips in others. With an increasing number of processor and graphics options available, here's hoping the Surface Laptop 5 continues to pave the road for more choice and better performance. 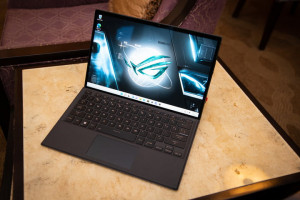 The ROG Flow Z13 is the one gaming laptop I've included on the list.

Its radical design is too interesting to not mention here, combining a discrete GPU in the form factor of a Surface Pro. That's right -- the Flow Z13 is really a 2-in-1 tablet, complete with a kickstand and detachable keyboard. But it's the idea that Asus stuffed an RTX 3050 Ti and an AMD Ryzen 5000-series processor into a tablet that gets me curious.

It seems impossible. Based on the success of last year's ROG Flow X13, I'm cautiously optimistic about just how powerful the Flow Z13 can be. With that device, Asus created the smallest gaming laptop ever made.

If it can pull off a similar feat with the Flow Z13, I'll be ready to count it among the most impressive PC gaming innovations of 2022.

OK, let's end with something downright strange. The ThinkBook Plus Gen 3 does two things I've never seen before. First, it has a 21:10 aspect ratio screen, which essentially makes this an ultrawide laptop.

As if that wasn't bold enough, the device also integrates an 8-inch touchscreen into the keyboard deck, just to the right of the keyboard itself. It makes for a unique laptop, and you can probably imagine how you might use all this extra screen real estate. The ultrawide panel, for example, would be great for having two windows open side by side.

The touchscreen, meanwhile, is perfect for note-taking and illustration -- especially since it's on a flat surface, unlike writing directly on the laptop screen.

The system also treats the second screen the same as it would an external monitor, meaning the possibilities are endless for what you might use it for.