How to track the huge asteroid about to pass by Earth 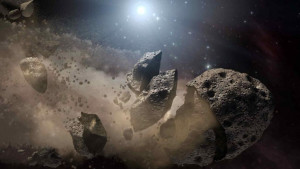 A kilometer-wide asteroid will be swinging through our neighborhood.

There's no need to freak out, but an asteroid that measures a little over half a mile wide (1 kilometer) will be coming close enough to our planet that amateur astronomers may be able to get a glimpse of it.

Asteroid 1994 PC1 is coming in for a swing past our cosmic corner on Jan.

18. While it's quite a big 'un as space rocks go, it will comfortably zip by at a distance of 1.2 million miles (1.93 million kilometers) from Earth. That's more than five times the distance between our planet and the moon, so if you aren't worried about the moon crashing into your house next week, you shouldn't be worried about this asteroid either.

Get the CNET How To newsletter

"Near-Earth asteroid 1994 PC1 is very well known and has been studied for decades by our planetary defense experts," NASA tweeted Wednesday. "Rest assured, 1994 PC1 will safely fly past our planet."

Asteroids go whipping by us pretty much every day. Thousands are cataloged and tracked and most that pass close by our planet tend to be pretty small.

1994 PC1 is a pretty big one to be venturing so far outside the asteroid belt, but by no means is it unprecedented.  The stony giant will come ripping by at a sizzling 43,754 miles per hour (19.5 kilometers per second) relative to Earth.

All that speed will make it observable for backyard telescopes of about 6 inches or wider in diameter. The easiest way to spot it is to use some sort of skywatching software like Stellarium or a website like In The Sky.  NASA's Eyes website also offers some cool visualizations to track 1994 PC1's progress.

If the weather doesn't cooperate where you are or you aren't much of a backyard astronomer, the Virtual Telescope Project based in Rome will be livestreaming a watch party.